As the world celebrates the social, cultural, economic and political contributions of all women this month, GolfNow also is recognizing some of the voices closer to home by taking a look at some of the female leaders in the game.

With the recent golf boom of 2020 comes the good news that participation is growing, particularly among select groups, such as new golfers, returning golfers, juniors and women. That diversity is packed with new opportunities for additional avenues for growth in the game, including women in positions of leadership.

GolfNow recently talked with several of its partners – an exemplary list of female leaders including golf course owners, head professionals, teachers and administrators – who shared stories about their relationship to golf and their roles and responsibilities they expressed in order to lead and grow the game among women.

Family is a common theme among these female leaders when it comes to their introductions to golf. Ashley Skidmore started playing golf only because she had to wait through her brother’s golf practice in order to get a ride home from school.

“I tried it out and decided that I really liked the game and I picked it up fairly quickly,” she said. “Over that next summer, I was introduced to the First Tee of Greater Austin and fell in love with the game.”

“My dad bought me a set of Tiger Woods golf clubs as a kid and I loved the way they looked,” said Ashley Keller. “He put me in a summer clinic when I was 11 and that’s when it began.”

Although her mother was a four-time college All American and professional tennis player, Julie Steinbauer Leventhal chose golf instead as a teenager. “My dad was involved in the PGA tournament at Doral and runs the Junior Orange Bowl golf tournament so I was always around golf,” she said. “I decided I wanted to play golf to rebel against my mom.”

It was more of a “if you build it, they will come”-type of situation for Kristie Fowler. Her father actually built a golf course in Grand Junction, Colo., and started a junior golf program. “He built a community, taught me how to play and gave me the passion to follow in his footsteps,” Fowler said.

It might have been family that provided the “why” and the inspiration to succeed at whatever they decided to do in life, but there were other influencers, as well.

LPGA Hall-of-Famer and fellow Berks County, Pa., native Betsy King provided plenty of inspiration both on and off the golf course for Cheryl Heckman. “She has accomplished so much in golf but also gives back to her community by supporting and hosting the Betsy King LPGA Classic for which I volunteered,” Heckman said. “She also was very involved in her own charity, Golf Fore Africa, which has raised millions of dollars to support children and families in Africa.”

Fowler looks up to people who find something positive in challenging situations while mentioning another Hall-of-Famer, Annika Sorenstam, as her inspiration. “I never saw her get down and she was always happy with what she had, and always was striving to do her best 100 percent of the time,” she said.

“I find inspiration in almost any professional athlete,” said Elizabeth Clarkson. “I love watching the Olympics because you know how hard each of those athletes have worked to get where they are, and it always makes me want to work harder toward all my goals in life.”

These female leaders also have found additional inspiration from the grit, determination and talent of their favorite female golfers, which comprise a leaderboard of greats both past and present. Some of the many names mentioned include Annika Sorenstam, Lexi Thompson, Betsy King, Nancy Lopez, Peggy Kirk Bell, Jessica and Nellie Korda, Paula Creamer and the great Babe Zaharias. Sherry Dircks also mentioned what could be the next generation of superstars – all the kids learning and growing through the First Tee.

“I have been with the First Tee for over 20 years and to be able to watch our participants use the game of golf to achieve their wildest dreams and goals is my greatest inspiration,” Dircks said.

When it comes to bucket-list courses, there’s not as much variety with this group. The Old Course at St. Andrews and Augusta National Golf Club top most everyone’s list. “Augusta National, of course,” said Keller. “Because who doesn’t want to play there!”

All that inspiration helped these ladies navigate their own paths to leadership in a male-dominated sport, which seemed perilous at times, according to several.

Similarly, Laura Beuhring tries to keep the human element top of mind. “I care about my team members and the guests that come to the course,” she said. “Ours is one of the friendliest and most-welcoming teams I’ve ever worked with.”

Several women talked about how breaking down barriers of misperception was key to earning respect in the workplace. Skidmore said females can immediately be looked at differently. “You are looked at as though you are not competent, weak and emotional, and I strive to make all these assumptions false,” she said. “My leadership philosophy is to create genuine professional relationships and treat everyone with respect, and not ask anyone to do a task that I would not do myself. We are united as one team, regardless of gender.”

“Sometimes I feel that people think they can push me around because I am a female,” Keller said, “but I stand my ground and show that I deserve the same amount of respect as a male would get.”

Others see through a more optimistic lens. Heckman says her leadership approach is symbolic to her feelings about the game, “with honesty, integrity, a competitive spirit, play it as it lies and take your breaks but always yearn to improve your outcome.

“Golf, in itself, is a bridge that can connect us to all genders, ages and ethnicities,” Heckman said.

Fowler said she gravitated toward people who let her do her thing and created programs that not only were successful for her, but also for her customers and the business overall. “I learned a long time ago to be firm, fair and consistent, while also trying to have fun and encouraging my staff, members and customers to do the same,” she said.

And what would these female leaders be without some sound advice?  We asked this group of women what their best piece of advice would be for young females trying to make it in golf. A common theme was to believe in yourself, learn from others and don’t be afraid to speak up.

Fowler suggests tapping into a female network from which you will hear many success stories that will help motivate you.

Reed agrees and sums things up for female golf course operators. “It helps if you understand the game and know the difficulties with golf. Also, tee sheet management is the most important. Make sure your customer thinks he/she is the only person playing. Make sure pace of play is acceptable and listen to all suggestions, good or bad! And lastly, employ a good and loyal staff that reflects your goals.

Mooney and his staff have learned a lot during the ups and downs of the pandemic in 2020, which entailed a state-mandated closure from March through April followed by a boom of business from June through October. Long-term, the bumpy ride may have been worth it. 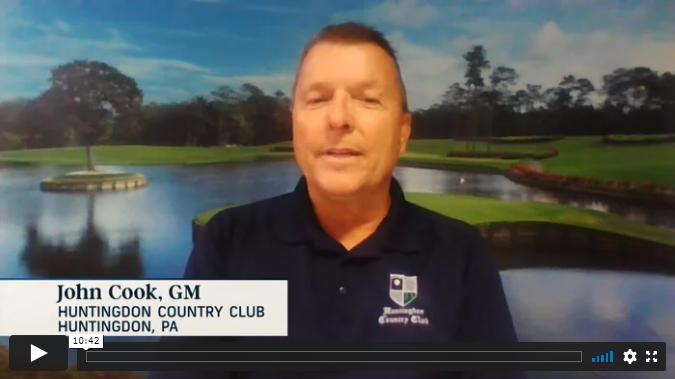 While the best-maintained greens in the area are reason enough to keep golfers coming back to Huntingdon Country Club, the club’s not one to rest on its laurels. Their decision to renovate an old grill room in a historic section of the clubhouse – and install a Full Swing simulator in the space – also has been a real game-changer this year.