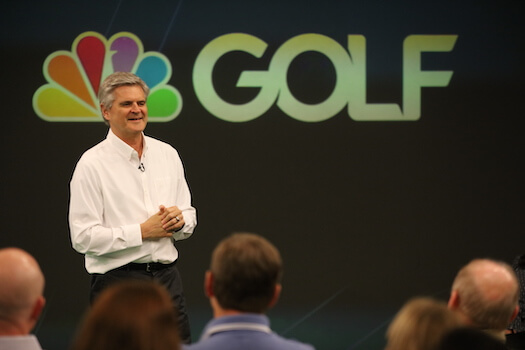 Golf course technology meets the Rise of the Rest

AOL co-founder Steve Case visits GOLF in search of innovators and entrepreneurs across the U.S.

We talk a lot in this space about how the concepts of technology and innovation have positively affected the golf industry – more specifically, golf course operations. Many of us remember the late ’90s when the “You’ve Got Mail” voice became a familiar sound to all AOL users and how that phrase permeated popular culture (For you movie buffs out there, it’s been 20 years since Meg Ryan and Tom Hanks started an intense and anonymous online romance in the Hollywood film named after the phrase).

Former AOL CEO Steve Case, one of America’s best-known and most accomplished entrepreneurs, is a pioneer who made the Internet part of everyday life. Now as Chairman and CEO of the investment firm, Revolution, Case has turned his passion for helping entrepreneurs into a search for innovators across the country.

On Monday, April 29, Case and his Rise of the Rest bus tour – a delegation of like-minded people more than 30 strong – made a stop at GOLF headquarters as part of its trek across the state of Florida. The Rise of the Rest tour visits some of the most compelling companies that started outside of Silicon Valley, New York City, and Boston. The tour’s seed fund also invests in the most promising start-ups found in smaller markets across the United States.

Case’s tour came to GOLF’s Orlando campus to learn about GOLF Channel’s transformation – how it’s become more than a television network by identifying innovative technology that offers better ways to serve the modern golfer. GOLF showcases this with businesses such as GOLFNOW, GOLF Business Solutions, and GOLF Advisor – all located at the intersection of golf and technology and striving to guide our golf course partners along the way.

“We’re trying to do what we can catalyze a movement, to back more entrepreneurs in more places to level the playing field so everybody, everywhere, actually does have a shot at the American dream and there can be job creation everywhere,” Case said.

The GOLF Channel story is the “perfect example” of that, he said. An idea that made a lot of sense to co-founder Joe Gibbs but crazy to most people who thought it was destined to fail. Eventually, the idea broke through, and GOLF Channel became a successful media property. However, what’s even more impressive, according to Case, was that GOLF kept the entrepreneurial spirit intact.

When addressing the GOLF Channel leadership team, Case said, “Smartly, (you) said ‘OK, we could just continue to do that but how do we imagine a broader platform – a bigger brand, a broader company?’ – and having now a whole slew of products and services is a great example of the reinvention that’s required.”

As we all strive to grow, it’s not a bad idea to take the advice of Steve Case and take a closer look at your business.  How are you reinventing yourself? We can help. To learn more on how to streamline your course operations, CLICK HERE.

Every year, golf’s big confab in Orlando not only shows off the “merchandise,” but also is becoming the place to learn about the industry’s many services. Stop by booth # 2173 to explore the GOLF Business Solutions exhibit space.

Advancements in cloud-based technologies are helping more and more golf course operators approach their businesses differently these days. Hear all about it from industry experts in this Industry Roundtable video.