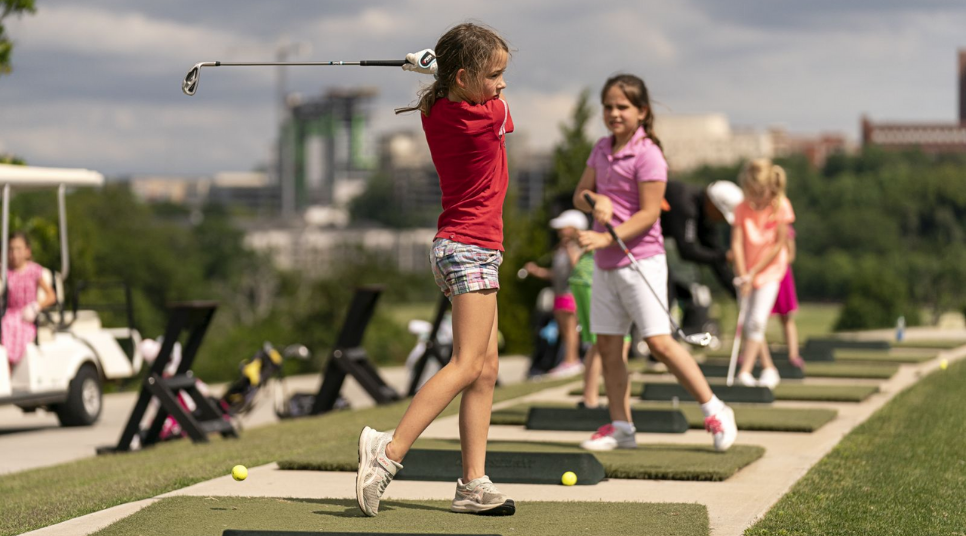 It’s easy to understand that growing junior golf is vital for the future health of the game.

The hard part is figuring out the right strategies to recruit, engage and capture these youngsters for life.

Nick Lawson, director of instruction at Celebration Golf Academy in Florida, said he’s seen participation in junior golf programs fluctuate in the 15 years he’s been teaching there. “I wish there was a secret sauce,” he said of growing the game.

While there is no magic formula, there is one simple strategy most instructors swear by that generally works: Make golf fun. “If you keep the game fun, you make it enjoyable,” Lawson said. “Golf can be frustrating and intimidating at times. Those are bad words.”

Instructors at golf academies around the country are finding new and creative ways to incorporate fun into their lessons, clinics and programs. We asked lead instructors at three successful academies about tips that might help other golf facilities establish junior programs or improve the ones they already have.

Jason Kuiper has, literally, watched the Grand Slam Academy grow from the ground up.

When he started as the director of instruction in the fall of 2018, the academy in Atlanta was run out of a temporary building, as the golf course transitioned from a traditional 18 holes into a dynamic new facility featuring nine reversable holes, the Cupp Links short course, the Dan Yates Putting Course, and a double-sided range with an academy short-game area. In the three years since, Kuiper said all of the new programs, clinics and lessons he’s instituted have impacted more than 1,500 kids. “We have been evolving from day one,” he added.

Kuiper launched all the usual offerings – PGA Jr. League, PGA Family Cup, summer camps, private lessons, after-school golf, Saturday clinics, etc. They cater to all ages from 3 years old on up. The academy has partnered with U.S. Kids to create a ladder of learning. Parents, coaches and the kids, themselves, can track skill development. Kids who master one class move on to the next.

“The big thing with our clinic program, they are ongoing,” he said. “They never stop. They are a la carte. A kid can come and go. We keep a giant spreadsheet (of each student) … They work through the program at their own private pace.”

Kuiper has hired three new instructors during the past several months because “everything sells out” so fast. His best piece of advice for growing an academy to this level?

“Do not be set in your ways. Listen to feedback,” he said. “Find out what they (parents and kids) want and then provide it.”

Jeremy Anderson found the Legacy Golf Performance Center in Phoenix, Ariz., in disarray when he was hired as its 10th coach in 2017. Anderson said instructors were trying to undercut one another’s rates to attract students. After being promoted as the director of instruction, he rebuilt the entire academy by retooling the staff and curriculum. “I spent the first six months just trying to show the community that we were consistent, and we were going in the right direction,” he recalled. “They had tried new programming before. When only one person would show up, they would cancel (the class).”

When faced with a similar situation early on, Anderson said he stuck with it for the full two-month duration of the class to show parents that if they signed up, that lesson or clinic would happen regardless of how much profit was gained or lost. That’s the commitment needed to get a junior golf program going. Gaining the trust of customers has created a positive new environment, Anderson said. He and his four other coaches earned nearly $700,000 in lesson business last year, compared to the $300,000 generated by 10 coaches just a few years prior.

Today, Anderson said he teaches four juniors ranked among the top 50 in the world and notes that the academy’s reputation is just as important as what it offers. “It’s more about word of mouth and perception,” he said. “It’s like a high school kid who can’t break 100, then shoots in the 70s a few months later. People want to be a part of that. It draws a crowd.”

Like Kuiper, Lawson preaches flexibility and catering to customer needs. When the local school district recently pushed afternoon dismissal from 3 p.m. to 4:30 p.m., Lawson feared the worst for his after-school programs. For his winter programs, he began purchasing glow golf balls and lights so that lessons and clinics could start at 5 p.m. and finish in the dark at 6:30 p.m. “We were worried since school hours changed, we would lose a lot of juniors,” he recalled. “A lot of juniors love being out here in the dark. We are putting lights in the carts, so we can get around safely. The kids went to school and told their friends how fun it was to play golf in the dark. We actually grew the program. We thought it would be a downer. It turned out to be a good thing.”

Lawson and his staff are employees of the golf club, which is important for synergy between the course and the academy. He said having access to the course and its facilities is critical for success.

“I don’t think there’s a class we do that doesn’t go on the course. Every day, we go to the course,” he said. “I’m a big believer you’ve got to be out there to do it in competition. We have a great relationship (with the club). We can hit balls and have access to the range whenever we want. It’s a huge need if you open an academy. If you are an independent (teacher) or part of the staff, the relationship with the head pro or general manager is super important. I have friends where that is not the case. Having the support of a club is huge.”

He believes the key to helping each student learn is making them comfortable. Create classes and clinics that pair similar skill levels together.

Who Is The 9-Hole Golfer?

Larry is beginning to love golf again. Like many of the nearly 6.2 million people who returned to the game or picked up a club for the first time in 2020 – the highest annual number on record – his work-from-home situation provided the perfect opportunity to get in a quick nine throughout the week….

It’s been a year and counting, and golfers continue to flock in record numbers to golf courses across the country. In 2020, COVID brought the world a pandemic and with it an unexpected opportunity knocked on golf’s door, declaring to the world that golf was safe. And because very few outdoor activities can make that…